The H-1B visa program allows employers to hire guest workers in “specialty occupations” and allows these workers to apply for permanent residency while working on the temporary visa. Some immigration reform advocates argue for an increase in the number of H-1B visas to address a shortage of STEM labor and to allow businesses to compete globally for the “best and brightest” talent.

Others argue against increasing the availability of such visas for fear the program allows firms to employ guest workers at lower wages than domestic peers and is heavily used by outsourcing firms to transfer jobs to less costly destinations. 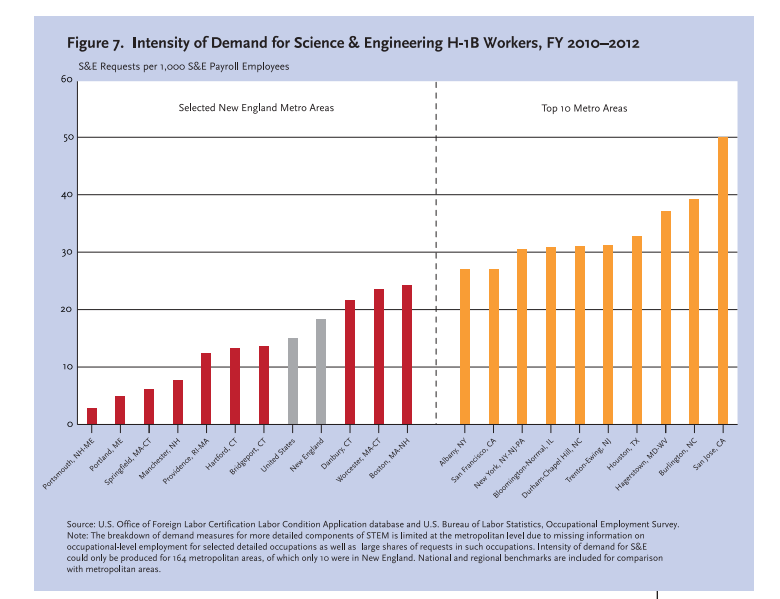 This debate about the role of H-1B visas is based almost entirely on analysis at the national level. To better inform policy discussions in New England this report provides new insights into the geographic variation of demand for H-1B visas, the types of workers requested and their regional concentrations, and the types of employers that demand H-1B visas in the region.

Proponents of the H-1B visa program argue for an increase in the number of H-1B visas to allow businesses to compete globally for the “best and brightest” talent. Others express concern that the program allows firms to employ guest workers at lower wages and is heavily used by outsourcing firms. The Boston Fed’s analysis shows that neither group is completely right: in New England, the H-1B visa has multiple uses.

“Current policy discussions about how to improve the H-1B program suffer from limited analysis of its intended use in the region,” said Robert Clifford, Senior Policy Analyst at the New England Public Policy Center and author of the report. “Our analysis of the demand for these visas illustrates that there are a myriad of uses for the program and suggests the need for clearer policy goals.”

This report finds that New England has some of the highest levels of demand for H-1B workers nationwide, relative to employment, due to significant demand from a few metropolitan labor markets in Connecticut and Massachusetts. This analysis also shows that there are various intended uses of the H-1B visa: it is not solely used to address a STEM-skills shortage nor is it used principally to outsource work to less costly locations. Finally, the report recommends developing a clearer policy goal for the H-1B visa program, which would support more coherent criterion for admitting highly skilled guest workers and provide a context within which to determine the desired admission levels of the program.